Our financial markets continued to work on finding some levels of stability over this past week. After hitting the year-to-date lows in mid-June, we have been gradually climbing higher, although the volatility remains high. Part of the rally we experienced over the last few trading days may have been aided by the upside surprise in earnings and guidance by Samsung. The Asian chipmaker certainly surprised many analysts with its more upbeat outlook on chip supply and demand. It is hard to say if this will “spill” over into the earnings season we are about to embark upon but does speak volumes to the state of things being oversold to some degree. Any glimmer of demand being somewhat sustainable in the technology sectors will be welcome news in the weeks ahead.

We continue to closely monitor the many economic, recession and inflationary indicators for signs of our next directional move. The Federal Reserve appears intent on raising rates again by 75 basis points at their next meeting on July 26th – 27th. Fed officials Waller and Bullard both back such a move, even it means slowing the economy in the near-term, according to statements made by both on Thursday. This type of rhetoric should come as no surprise given the severity of the recessionary and inflationary concerns that continue to persist. The Wall Street Journal conducted a poll in June that stated, two in five leading economists said they saw at least a 50/50 chance that the U.S. enters a recession in the coming year. What might be different about this recession, however, is that the unemployment rates and forecasts remain near historically low levels. The U.S. has never had a recession in the post-World War II era with a jobless rate this low. In fact, the jobs data released on Friday, showed a much stronger than expected report with the unemployment rate remaining at 3.6%. This might bode well if we do indeed see a recession from a technical standpoint. That means it could remain shallow and short-lived, something we would all welcome. We often get asked these questions, when we are experiencing times like this; “How long will this last and how long will it take to recover?”.  These are very good questions indeed and ones where we can reference our historical past for some guidance. I’ve included the chart below highlighting the length of the past several recessions. For a reference point, 2001 was the “dot-com technology bubble”, 2007 was the “great real estate bubble and subsequent financial crisis” and 2020 was our most recent memory of the “COVID lockdown”. 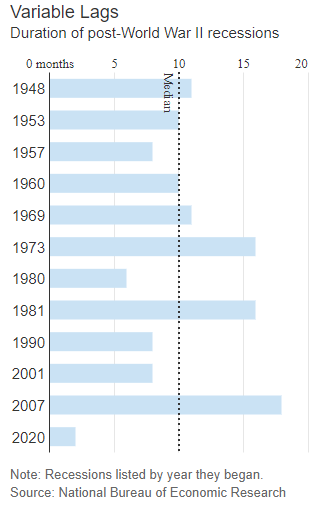 As you can see, the median duration for each occurrence has been close to 10 months. The recovery times are different for each period with the financial crisis taking longer than usual at nearly 18 months. I do think it is important to keep perspective of each occurrence and eventual outcome. I would expect a “shallow” recession and subsequent recovery time to be shorter than usual in this scenario. Again, only in time will we be able to tell the true story. What I do know however, is we are entering another election cycle. Crazy things can happen, but it is widely expected that a red tide will move into the House which means a divided government. Historically speaking, the financial markets typically like this as it means no significant policy changes will occur for several years. For better or worse on a personal level, a certainty of nothing is better than the uncertainty of more change in this current environment.

Rest and enjoy your weekend!